Today I woke up to an empty apartment.  My roommate went to go have breakfast with her parents and everyone else got up early!  I was hanging my pictures on the wall of my bedroom and singing to music when Mayra walked in and made me jump! It turns out she slept in too and I didn’t know she was still home!  Mayra and I went to Disney Springs to meet Cassie and her sisters.  We walked through the World of Disney and went to lunch at the T-REX Cafe.  The decor at the restaurant was awesome.  It was similar to a Rainforest Cafe but everything was with dinosaurs.  After a period of time the lights would change and the dinosaurs would come to life during a “meteor shower”. I had the chicken t-rexadillas and a Jurassic salad.  The food was pretty good too!

After lunch, Mayra and I went back to the apartment and watched some Disney movies with Cristina.  Cristina and I ended up taking a nap during Emperor’s New Groove-I was so tired.

Once all of our roommates got home, we decided to go do the Kitchen Sink Challenge.  The Kitchen Sink is a “sink” full of ice cream that you can buy for $29 at Beaches and Cream, a restaurant at the Beach Club Resort.  It comes with every flavor ice cream they have piled with every topping they have in the store.  We decided to park at Hollywood Studios and take the boat to the Beach Club resort.  When we got off the boat the driver told us that EPCOT illuminations was about to start so we watched it from the dock.

When we got to Beaches and Cream we were told it was going to be an hour wait so we took the boat over to the Boardwalk to walk around while we were waiting.  We found some dance club, which was very awkward as there were only about 10 people in there, but it looked like a fun place to go back to.  Unfortunately, we missed the last boat back to the Beach Club so we had to walk around the long way.  When we got to the restaurant they said they gave away our spot at the counter but they had a booth open.  We waited for a good 15 minutes while they were making the sink.  When it came out they turned off the lights and made an announcement and gave us a round of applause.  We ate it all, but I was so full.

After our ice cream, we had to walk from the Beach Club to the Hollywood Studios because we missed the last boat to Hollywood Studios too.  The walk was actually really pretty and it didn’t take us too long.  It was good to walk off the amount of calories we had just consumed!

When we got back to the apartment we decided to do our roommate gift exchange.  Cristina, Stephanie, and I all made letters that were themed to a character.  Stephanie also got us a jar of glitter that was labeled “fairy dust”.  Cassie typed up song lyrics in the shape of our state and drew pictures on it.  Mayra made us personalized coffee mugs, and Gretta got us a bunch of Disney stuff like a candy bracelet, Disney rubix cube, and a Dory washcloth.  After our gift exchange it was close to 1am so we all went to bed!  It was a long day! 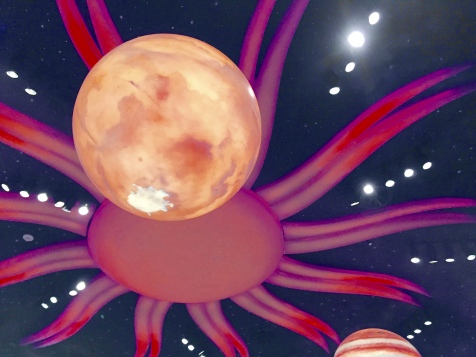 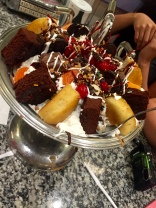 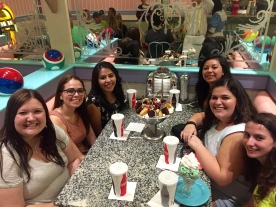