Today was my first day off in five days. I decided to sleep in and it was apparently much needed because I didn’t wake up until 12:20pm!  Needless to say, I am very well rested.

Gretta had the day off as well so we decided to go run some errands.  We started off by going to Cast Connections which is the discounted store for cast members and I bought more things than I planned.  But I got three pairs of ears and an autograph book for $15-it was a deal!  After I made my purchases I was waiting for Gretta in the check-out line and saw a bunch of huge Olaf stuffed animals behind the counter.  I made the mistake of asking the cashier how much they costed and I ended up leaving with one.  Don’t worry-Gretta buckled him in the car.  Safe-D first.  (Safe-D begins with me is the Disney slogan)

Gretta said that she knew of a place in the Epcot parking lot that had cute things for Disney employees so we got a little lost finding it.  After a while of driving around we finally found it!  Unfortunately it is closed on Mondays so while we were there Gretta picked up a couple more costumes for work (she works at Soarin’).

I was really bummed the store wasn’t open, so we decided to go to Company D which is a similar store only it is by Magic Kingdom. That store was thankfully open and we each got a few things.  I got a Disney sticker for my car and an ID holder for my Disney blue ID.  They also had a bunch of Disney College Program merchandise which I will have to go look at again sometime.

We had lunch/dinner at Taco Bell and then we drove to Publix.  Publix is right by our apartment and is never that busy so it is the perfect place to grocery shop even though it may be a little more expensive. I got a bunch of healthy food this time-it helps grocery shopping after you eat instead of before and then we went home!

Olaf is now safely inside and hanging out on the couch and I am happily watching Gossip Girl in my room.  Overall, it was a nice day off!  I’m glad that I didn’t have to do much today. 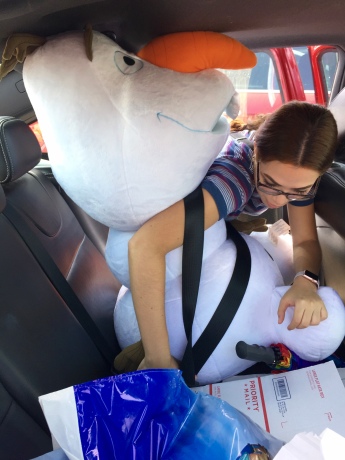 This guy was scary but not as scary as the refs in the Bears vs. Packers game today😅
Tested out the new Enchantment dessert party and got to see the fireworks for the first time🎆
WHAT. A. DAY!! I couldn’t have imagined a more magical day for the 50th anniversary. HAPPY BIRTHDAY MAGIC KINGDOM!!🥳
Follow on WordPress.com